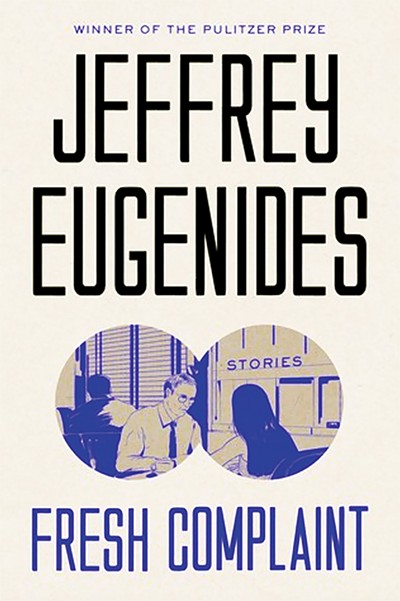 My main complaint with Jeffrey Eugenides is that he doesn’t turn out novels fast enough. That’s not really his problem, though, as much as it’s mine. I’m a fan, and what a fan wants most is to consume. But books — especially really good books — need time to cook. So take your time in the kitchen, Mr. Eugenides; I’ll wait.

Until the next novel makes its way onto my plate, Fresh Complaint(Farrar, Straus and Giroux), Eugenides’ short story collection, is new on the menu.

Eugenides imbues many of these 10 stories with a sense of urgency, one that drills into the chest of the reader to get at the valve that regulates heart rate. With each page, as the story nears its inevitable conclusion, we feel as though we’re there with the protagonist, that what is about to befall them will also befall us.

In the title story, a young immigrant woman is so panicked over her imminent arranged marriage that, in desperation, she brings ruin upon a visiting writer to her college.

Or does he bring ruin upon himself? As the married man invites her to his hotel room, runs out for condoms, and comes back to complete the act, he knows it’s wrong. We’re right there with him, heart pounding, conscience churning, as he thinks of his family back home and the damage this could cause.

Yet, it happens. And, while it appears that only one gains from the encounter, both suffer.

This sense of peril is felt, too, in “Great Experiment,” when a once-promising poet takes stock of his life and the ways in which it might improve. Though he once had the literary world at his fingertips, Kendall is, these days, the editor for a small publishing house. Working from his absentee boss’ penthouse on the Gold Coast of Chicago, it is as if Kendall becomes awakened to his opulent surroundings by the company’s accountant. Why not us? The bean counter suggests, and Kendall wonders the same when he goes home to his wife and kids and the house they’d bought to fix up, but which is still in a state of disrepair after so many years.

When the two make the leap into the world of embezzlement, the warm embrace of security takes over. But underneath is that dread, the danger that something, somewhere, is amiss and just waiting to be overturned.

But perhaps we aren’t all familiar with that sense of foreboding and dread, as though something just beneath the surface is pressing upward and threatening to tear the fabric of your comfortable life. Good for you if not. In “Air Mail,” the subject is something we can all relate to: poop. Okay, it’s dysentery, and perhaps we haven’t all experienced that. But remember that stomach bug you had just before the holidays? There you go.

Mitchell is on a journey, both physically as he travels the world, and spiritually, as he takes stock of himself among humanity. During an unintended extended layover on an island off the coast of Thailand, Mitchell is overcome by amoebic dysentery and the inward thoughts of a man whose innards are emptying out. Convalescing in a bamboo hut, he writes a series of letters home to his parents, informing them of his mystic insights. He self-medicates by starving himself, as he describes to his parents: “Rather than being some weird penance, fasting is actually a very sane and scientific method of quieting the body, of turning the body off. And when the body turns off, the mind turns on. The Sanskrit for this is ‘moksa’, which means total liberation from the body.”

There is a little something for everyone in Eugenides’ collection, and, as I read it over the Thanksgiving holiday, it was more like leftovers — a series of turkey sandwiches — as opposed to the heavier meal of his Pulitzer Prize-winning Middlesex or his debut The Virgin Suicides. The stories hit me just right, if not making me a bit uncomfortable, just when my hunger was at its greatest.