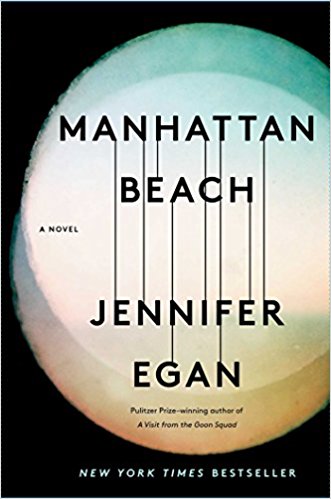 As women across the country publicly opened up about harassment and assaults by politicians, actors, and news personalities, I cracked open Manhattan Beach, the new novel from Jennifer Egan. And there it was in black-and-white: the systematic belittling of women harkening back to a time when the phrase “boys will be boys” might have been coined. Who says fiction is fake? Who says novels are mere fantasy? The fiction writer casts an eye on society with a perception — and with the advantage of time and space — like few others can.

Anna Kerrigan works in a Brooklyn Naval yard during World War II, inspecting the delicate instrumentation that will find its way into the battleships under construction around her. She relishes feeling useful and her newfound sense of freedom, but craves more. When she happens upon a training exercise for Navy divers, she sets her sights on the task.

It was a time that saw unprecedented independence for and dependence upon women as they went to work doing the jobs men had occupied before shipping off to war. Despite such reliance, the respect offered these women was fleeting.

Egan writes: ” . . . unmarried girls didn’t live alone — unless they were a different sort of girl, which Anna was not. What would the neighbors think? Who would meet her at the end of each day? Fix her breakfast and supper? Suppose an intruder climbed in from the fire escape? Suppose she fell sick or got hurt?”

The third-person omniscient narrator’s insistence on using “girl” instead of “woman” throughout underscores how resistant society was to granting respect. Even as Anna is begrudgingly allowed on the diving team, “most of her assignments had this air of the domestic.”

Based on the description of Anna in marketing materials — “She becomes the first female diver, the most dangerous and exclusive of occupations, repairing the ships that will help America win the war” — Manhattan Beach is not the story I was expecting. But that’s my fault and what I brought to the book, rather than any fault of Egan’s masterful storytelling.

What we’ve come to expect in fiction is a revolution, a Norma Rae moment that turns the tide of an unacceptable social norm. In this case, Anna would’ve changed the thinking and ways of her superiors at the Naval yard, the men she worked alongside, her neighborhood, and her family. But Egan tells a far more real story. While the geopolitics of the world evolved during WWII, the world of women and minorities in the United States did not. Responsibility and respect were fleeting.

Anna’s father is a low-level member of a crime syndicate and constantly on the hunt for a better way to care for his family. Her mother was on the road to fame as a dancer with the Ziegfeld Follies before children came along. Anna’s sister, Lydia, was born with a birth defect and is dependent on others. The fate of the Kerrigan family is tugged, unknowingly, by the strings of syndicate boss Dexter Styles.

Her father goes missing and Anna becomes the first female diver, and this is when a habitual reader of fiction, a consumer of storytelling, might expect her world to change. But it doesn’t because real life doesn’t turn so quickly. Families still struggle to care for those with special needs, and women still struggle for equality. In this way, Egan tells a very real story and one we’re not used to reading in fiction — there is no pretty bow on a neatly wrapped package.

In 2010, female authors, including Jodi Picoult and Jennifer Weiner, lamented the attention lavished on their white, male counterparts (in particular Jonathan Franzen), while women went largely unheralded. The following year, Egan won the Pulitzer Prize in Fiction for her second novel, the experimental A Visit From the Good Squad. Since then, only one woman, Donna Tartt (The Goldfinch) has won. (In fairness, no winner was named in 2012, though Karen Russell’s Swamplandia! was a runner-up.) Is a woman due? Will Manhattan Beach be the next as Egan’s second? We’ll find out next year. Until then, the story remains the same, and the struggle persists.