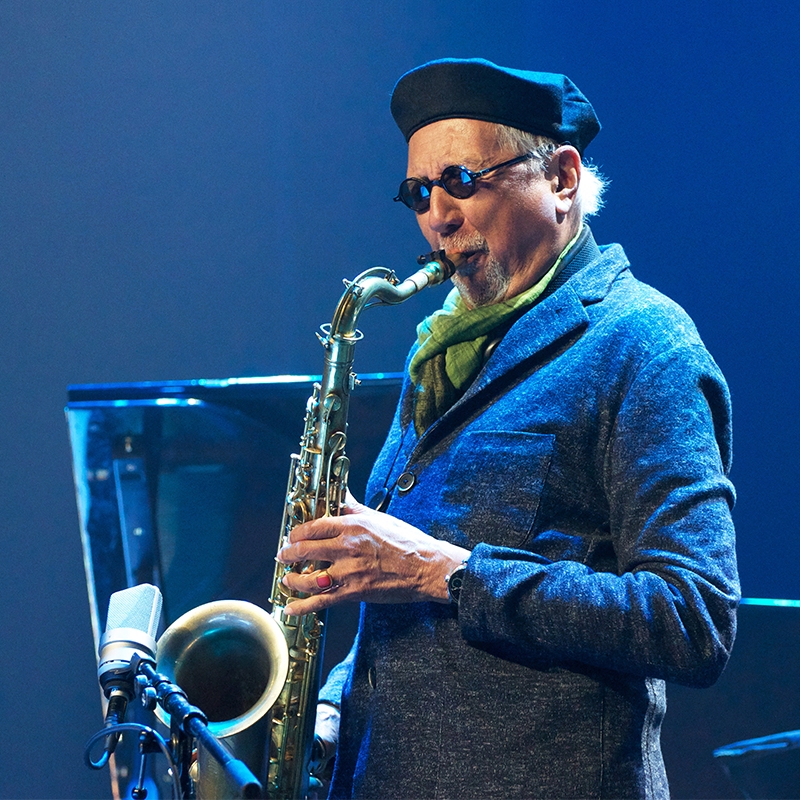 Charles Lloyd was born in Memphis on March 15, 1938. In his formative years he played with B.B. King, Howlin’ Wolf, and Johnny Ace, among many others. It was a time of mentoring under Phineas Newborn Jr. and with the strains of Willie Mitchell’s horn in his ears, Lloyd left for California and USC before making his way to New York. His 1966 album Forest Flower: Live at Monterey became a sensation and was one of the first jazz albums to sell a million copies. Along this meteoric rise, he was asked to play the Tallinn Jazz Festival in the Soviet Union in 1967 and his quartet was the first jazz group to play the storied Fillmore Auditorium in San Francisco. At the height of his career, in the early 1970s, he walked away from it all, retreating to Big Sur to lead a reclusive life. In the past years he’s come out of that self-imposed exile to again tour the country and the world. He is the subject of the 2012 documentary Arrows Into Infinity, was named an NEA Jazz Master earlier this year, and was invited last month to Rhodes College to work with students and to perform at the Levitt Shell. This interview about his early life in Memphis took place in his suite at the Madison Hotel with a view of the Mississippi River.

Nature seems to be an ever-present theme in your music. Herbie Hancock has compared your music to a “flowing river, cascading sound.” How has nature informed your playing?

I’m Pisces, you know, born on this river here. [Lloyd was born a year after the great Mississippi River flood of 1937.] It was set up for me to come. This is strong for me. When I play in New York, I stay at the Standard [Hotel] and we get a suite on the Hudson River. I try to always be near water because I’m water and my water flows like that.

Tell me about growing up in Memphis.

Anywhere I go in the world, and people interview me and talk to me, they tell me later that I’m always talking about Memphis. You see, I was supposed to be born here because, quiet as it’s kept, I realize now what this is a “source place” like New Orleans is with Louis Armstrong coming up down there. There are certain places that are source places, but what I was informed with here and what I took from it, it was grace playing with people like Bobby Blue Bland and Howlin’ Wolf and Junior Parker and Johnny Ace and B.B. and Roosevelt Sykes. So all those blues people I played with, that was very powerful stuff.

Where did you go to school?

I went to the catholic school St. Augustine first through third grades, but there was no music there and the nuns would beat me on my hands. In the fourth grade I left there and we moved to Orange Mound [and went to Melrose]. A beautiful thing happened to me at Melrose. There was a teacher, Mrs. Handy, and she taught with such warmth and such humanity that I began to be a little genius in mathematics and stuff. All of the sudden it all worked because I had the facility, but I couldn’t do it from nuns beating me on my hands. It’s not an indictment of them, but it’s a plea for tenderness for children in education. Mrs. Handy was so wonderful and it ignited something in me, and then music came at the same time.

How did the music come about?

Willie Mitchell had a big band playing like Dizzy Gillespie’s big band. Willie was a modernist, he was a genius and a special guy. I was in fourth grade and at lunch time there was a little assembly thing happening and Willie’s band was playing, and it just ignited me. I was maybe 8 or 9 years old, and I kept prodding my parents to get me a saxophone; they got me an alto finally. Then I was very blessed because my mother had a large house in Orange Mound and there weren’t adequate hotels for Duke Ellington, Lionel Hampton, and Count Basie, and all these bands that would come through, so these musicians would stay with us. I was in heaven, I couldn’t wait for these guys to wake up in the morning to pounce because I had questions.

And you ended up at Manassas High School. How did that come about?

At Melrose, Willie was far out of school, but he came over and blessed us with that music. I’d play around and I kept running into these young people who could play better than me, like Hank Crawford, Frank Strozier, George Coleman, and I found out they all went to Manassas. So I said, “I better get over there.” A teacher who taught at Manassas lived down the street from us and so I’d get a ride with her most mornings.

Do you remember the first time you were recognized for music?

I played an amateur show at 9 or 10 years old at the Palace theatre down on Beale Street and I won first prize, and Phineas Newborn Jr. was standing in the wings but I didn’t know him. He was maybe 16 or 17, and he said, “You need lessons bad.” So he took me around the corner on Beale and Hernando to Mitchell’s Hotel and dropped me off at Irvin Reason’s room, and said, “He needs help.” And that was it. Delusions of grandeur got nipped in the bud, so I couldn’t enjoy my first-place standing. Fortunately I got stopped because it made me always strive to be better at what I’m doing. And so, he came at just the perfect time. I still think we should have a statue of Phineas somewhere around here because he was amazing.

What was this drive for you and your peers to leave and become successful someplace else? Why not just stay and play on Beale Street?

Because we had heard Charlie Parker and we had heard Duke Ellington, and that music is the music of freedom and wonder. And our opportunities were limited here. We weren’t going to stay on Beale Street because that was commercial music, that was rhythm and blues what was going on, and while we are from that, and gospel music and all the music that is of this area, we were dreamers and we heard modernity.