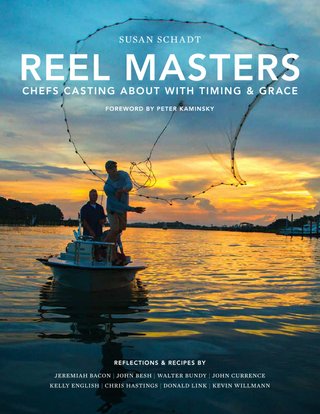 New releases are a feast for the senses.

When Susan Schadt felt a tug on her line, what she pulled up wasn’t redfish or trout; it wasn’t even an old boot or car tire. She’d hooked herself a second career as a book publisher with her own, eponymous press.

“If somebody had told me eight years ago when I published my first book, First Shooting Light, that I would start my own publishing company, I probably would’ve made a big wager against that probability,” she says. “I don’t like to bet against myself, but becoming a publisher and editor and occasional author, it was never a passion of mine, but it’s been a creative and evolving process that I tried and liked and have developed over the years.”

Susan Schadt Press has recently released two books — Reel Masters: Chefs Casting About with Timing & Grace, and The Chubby Vegetarian: 100 Inspired Vegetable Recipes for the Modern Table — cementing its commitment to the outdoors and conservation, the sporting life, and the culinary arts.

When Schadt retired as president and CEO of ArtsMemphis at the start of 2015, she’d already worked to produce several books through the arts organization and its Conservation Through Art initiative in partnership with Ducks Unlimited. Her own press grew from a newfound interest in book publishing, a rapidly increasing expertise, and a lifelong love of the outdoors and art. Edited by Schadt, Reel Masters, especially, harkens back to earlier titles such as First Shooting Light: A Photographic Journal Reveals the Legacy and Lure of Hunting Clubs in the Mississippi Flyway, and Wild Abundance: Ritual, Revelry & Recipes of the South’s Finest Hunting Clubs, among others. Both feature jaw-dropping photography by Murray Riss and Lisa Buser, respectively.

Buser takes a turn behind the lens again for Reel Masters with the hook, so to speak, of eight renowned chefs and their guides taking readers along on fishing excursions to favorite bywaters, coastlines, and bayous. Those chefs include Jeremiah Bacon, John Besh, Walter Bundy, John Currence, Chris Hastings, Donald Link, and Kevin Willmann. Memphis’ own Kelly English (Second Line, Restaurant Iris) and guide Don Helmer take us off the coast of Venice, Louisiana, to cast among old, abandoned oil rigs in search of “redfish or speckled trout and a few sharks.” Later, he’ll make up a mess of Ryan Plummer’s Killer Frickin’ Ceviche, Tomato and Crab Salad with Avocado Vinaigrette, and Venice Court Bouillon.

“One of the things I love about this trip is that we eat everything out of this one body of water for dinner,” English writes. “I never understand when a restaurant near any body of salt water serves food from other parts of the world.”

The coffee table-size book is big and beautiful. Part outdoor adventure tales and part cookbook with favorite recipes from each chef, it’s also a collection of family stories and legacies, relatable even for the great indoorsmen and the non-foodies. It’s the authenticity of the stories and the peek into these private retreats and personal rituals that Schadt says will appeal to readers of all types.

Schadt approached the busy chefs initially by email with the subject line: “Let’s go fishing!” From there, the network fanned out with the chef’s contacting each other to get friends and colleagues on board. “Kelly English was instrumental in that, John Currence and John Besh were instrumental as well; they plug in so fast and start connecting with people,” Schadt says in a phone call from New Orleans, where she is readying for an on-air radio and video segment with NPR. She’s hosting a launch party with seven of the chefs on December 6th in the Crescent City at Besh’s private events venue, Pigeon & Prince. Memphis launch events celebrating both books took place last month at Booksellers of Laurelwood, Rhodes College’s Cajun Fest, Babcock Gifts, and Kelly English’s Second Line.

Getting Peter Kaminsky, New York Times columnist and cookbook author, on board proved to be no less difficult. “I wrote him an email at the suggestion of Jeremiah Bacon, who’s in Charleston, saying, ‘We’d be honored if you’d write the foreword to our book,’” she says. “He wrote back within 30 minutes and said, ‘I’d be honored.’ So there’s a huge connectivity.”

Kaminsky writes: “Fishing taps something in our deepest soul. I believe, fundamentally, that is because it arises out of one of our most basic drives: the quest for sustenance. Whenever we fish, we are taking part in a pursuit that is older than humanity itself.”

Considerably less meaty, but no less beautiful and chock-full of flavor, is the latest cookbook from the husband-and-wife team of Justin Fox Burks and Amy Lawrence, keepers of The Chubby Vegetarian blog and authors of The Southern Vegetarian (2013, Thomas Nelson).

Burks is a photographer and regular contributor to this magazine, so the photographs are eye-catching and vivid, and the design a feast in itself. The high school sweethearts began their culinary love affair early, as they write in the book’s introduction: “In our teens and twenties, we were falling in love with each other, and soon the lines of our lives that had once paralleled started to converge. We were already both curious and adventurous eaters who craved the story behind a dish as much as the food on the plate. On our early dates, we sought out natural foods restaurants, of which surprisingly, there were quite a few in Memphis in the ’90s.” 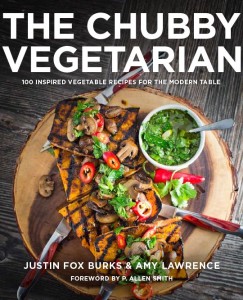 Tossed in with the recipes, the stories behind the food are here, as with the Ginger and Cashew Stir-Fry (Burks’ childhood fascination with his mother’s wok), Veggie-Packed Napa Cabbage Wraps with Spicy Peanut Sauce (a leaky dishwasher and kitchen damage), and Pupusas with Pickled Loroco Flower (time spent with a Salvadoran bricklayer building a pizza oven).

Schadt and Burks were already working together on next year’s SSP release, a book on Shelby Farms Park. When they met at lunch, they “immediately connected,” and Burks mentioned that he and Lawrence were looking for a new direction with their cookbooks. “As we like to say, ‘It was organic,’” Schadt says. A whirlwind process the likes of which few publishing houses would see — that initial lunch was last January and the book was released later this year in mid-October.

A Washington Post story last month featured the duo’s Vegetarian’s Roast Beast as its Thanksgiving no-meat dish. Despite the focus on vegetarianism, the recipes in this book will make meat-lovers’ mouths water as well. As Burks told the Post’s Joe Yonan about Thanksgivings past, “[W]e’re usually charged with bringing the quote unquote vegetarian dish . . . Bring the Tofurky, bring something meatless. But that word bothers me: ‘meatless,’ like you’re just doing without.” The adventurous have nothing to lose with the Chubby Vegetarian, though perhaps there will be less meat on the table in the future once you find the flavor is still there.

Growing up, Schadt fished with her father. It was something she looked forward to as a little girl and a pastime she still enjoys when she can find the time. No tall tale, she’s found her niche in publishing, working through the process and meeting people from all walks of life that she might not have met otherwise, and finding private Edens around corners most might not look.

With such ingredients, the recipe for Schadt’s success seems simple: “When you bring together chefs, fishermen, fishing guides, food, camaraderie, and family, you’ve got the makings of great stories that must be told.”