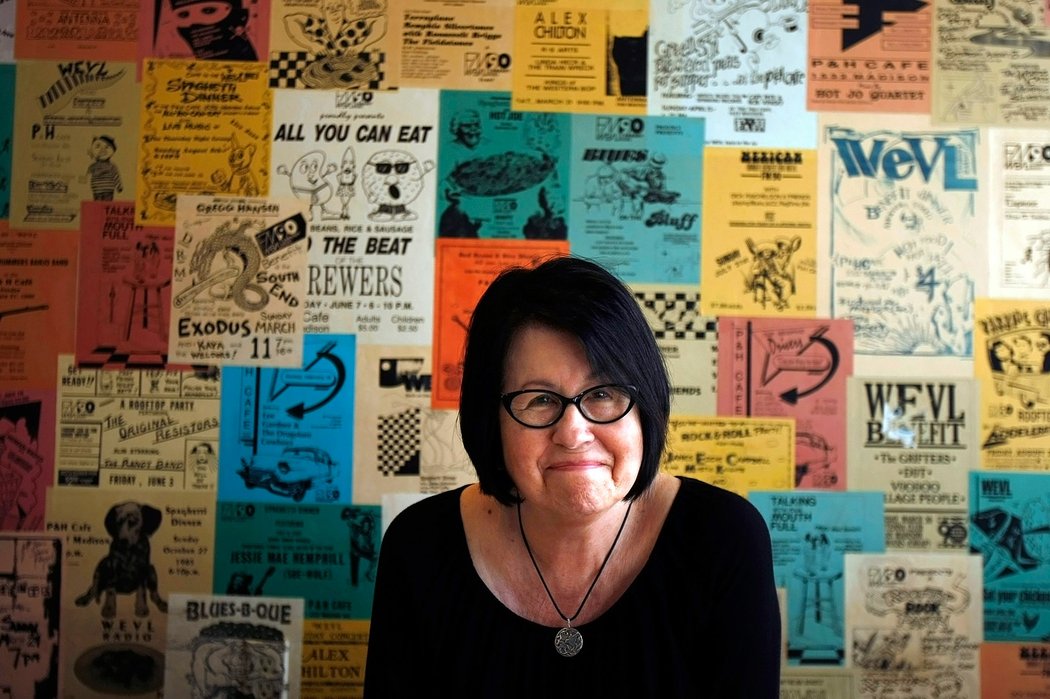 Consider this: Some of the greatest innovation in radio happened in Memphis. And not just in Memphis, but in a single neighborhood; if you were to take a walking tour of their locations, you’d barely break a sweat in July. The first radio station programmed solely by African Americans was WDIA on Union Avenue (WLOK on South Second was the second), Dewey Phillips ushered in rock-and-roll by playing Elvis Presley’s “That’s All Right” on WHBQ from the Chisca Hotel during his Red, Hot and Blue show; and Sam Phillips’ all-female station WHER, partially funded by Kemmons Wilson, was located at Third and Crump. And the first, and longest-lasting, all-volunteer radio station in Tennessee, WEVL, is still belting tunes from South Main.

The station didn’t begin life in the South Main Arts District, but in a house on Court Street between Madison Avenue and Poplar in 1976. It has seen five addresses in 40 years, yet the call letters remain a constant and the sense of community that the music and volunteers have engendered is a mainstay around town.

Later, station manager Judy Dorsey would hear the music. “I read about the station in an article and it hadn’t been around very long,” she says. “It was new, it was fresh, and I couldn’t believe we had something like that here.It sounded like something you’d have in Chicago or L.A. or New York or something, not in Memphis.”

It was blues and it was jazz and it was like nothing she’d heard before on the FM dial. This was pirate radio sanctioned by the FCC. Given 10 watts to play with from a transmitter located on the campus of Christian Brothers University, its strength was such that you’d probably lose the station in your car by the time you made it to Overton Park. “It was a 38104 station,” Dorsey says. “I couldn’t hear it where I lived out in unincorporated Shelby County near Bartlett. The only time I could ever hear it was if I drove around in Midtown.”

But just hearing it wasn’t enough for Dorsey, who had to see the station and meet the minds behind the music. “Some time passed and I met a man who did a show there and that really piqued my interest,” she says. She asked if she could visit and he told her to come down while he was doing his jazz show. “I snooped around and looked at the record library. It was in the winter and it was very cold in the air room; they didn’t seem to have any heat and you had to wear a coat in there. I remember one time in there you could see your breath. Let’s just say it was lacking in amenities; I have no memory of a bathroom at all.”

WEVL was founded by Dennis Batson, at the time a state social worker. Batson, who passed away in 2004, was a colorful character and music lover who also founded the Memphis Dulcimer Festival in 1988 and was a founding member of the North American Folk Music and Dance Alliance. A well-known presence behind the bar at the P&H Café where he served up cold beer for the regulars, he makes an appearance in Craig Brewer’s The Poor & Hungry.

Though the passion for the music was there, it wasn’t enough to power Batson’s fledgling radio station forever. “They need help.” That was Dorsey’s first thought when she walked into the station. “They had a lot of cast-off equipment that was mismatched. But it was cool listening to the old jazz and the blues, it was stuff I was trying to explore on my own at home, but here were some people who knew a lot about it. They knew a lot more about this music than I did and were playing it on the radio to a very tiny audience of people in a very limited range.”

She became a volunteer within an hour of that first visit in 1979, she says. As such, she mainly helped with clerical work — the membership list was kept on index cards with no computerization at all. Membership at the time cost about $10.

On your FM radio dial, the FCC has set aside the real estate between 88.1 and 99.9 for noncommercial, educational use — this is where WEVL rests, nestled in at 89.9. “Most stations in that part are either owned by colleges or religious organizations,” says Brian Craig, WEVL’s program director and one of only two paid, full-time employees. “In Memphis, we have WKNO’s FM station and Shelby County Schools has a station. Southwestern-Rhodes had two radio stations but sold one to the University of Memphis in 1979 and the other to the [Memphis public] library in 1989. Christian Brothers briefly had a station on that part of the dial in the 1960s.”

From its original home on Court, the station moved to the Exchange Building at Second and Madison in 1979, then back to Midtown in 1981 at the corner of Madison and Cleveland before moving to Rayner Street off Lamar in 1986. It’s been on South Main since 1990. The transmitter today is located in Cordova, is 400 feet in the air, and boasts 4,800 watts, reaching to Brownsville, Tennessee, to the north and Tunica, Mississippi, in the south.

Craig, who is the official historian for the Tennessee Radio Hall of Fame, was hired in 1992 and has spent his entire professional life with WEVL, having first visited when it was in the Exchange Building and becoming a volunteer as a teenager in 1981. “The newspaper used to list the radio stations every day and I could never pick up WEVL. I always kind of wondered what that was and then I saw one of their program guides in the library,” he says. “I lived on Cherry Road not too far from where the Mall of Memphis eventually was and I couldn’t pick it up. I finally put an antenna on the roof so I could hear it.”

WEVL is still an all-volunteer radio station with programmers curating their own playlists and the public largely relied upon for revenue. It’s a model seen across the country, though some stations have large benefactors. WWOZ in New Orleans, for instance, is a nonprofit, community-supported station owned by the New Orleans Jazz & Heritage Foundation. “That would be the equivalent of Memphis in May owning us,” Dorsey says. “They have a big sugar daddy, a safety net.”

In larger markets such as Atlanta, San Francisco, Portland, and Chicago, the Pacifica Network owns similar stations to WEVL. “And then there are some college stations that are sort of operated like this with volunteers from the city rather than just students doing shows,” Craig says.

Without that institutional safety net, there have been times between pledge drives when the budget becomes a bit thin, made thinner during times of recession. “We’re very susceptible to the economic down currents,” Dorsey says. “The second pledge drive I ever did, the stock market fell some humongous amount of points and that was a nightmare; we had a real tough time reaching our goal. Then when we moved down here in ’90, within a year we had a recession and that was really tough. I can remember going over to MLGW in person and begging them, ‘Please can we have another extension on the bill?’ and they wouldn’t give it to me. I just started crying, and they still wouldn’t give it to me. So we had to get hold of people and have them chip in, but we haven’t had to do anything like that in a long time.”

The largest fundraiser is held yearly — the Blues on the Bluff, which held its 28th annual concert this past summer. It’s a grassroots sensibility and the volunteers that help WEVL to maintain its pirate-like feel. During pledge drives, the station asks for comments from members and Dorsey says she constantly hears that WEVL is the “spirit of Memphis” and words such as “variety” and “diversity.” It is the curating of music by the programmers that adds value to the station. “There’s all this music out there and most people don’t know what it is, but you have someone who’s doing that for you,” Craig says.

“That harkens back to what I originally said,” Dorsey says, “that I knew there were things I wanted to listen to and I was trying to cherry-pick it from the library, but here I had somebody basically giving me a history lesson in early jazz and early blues, which I was trying to get into.”

What saw FM radio’s rise in the 1970s — what David Hepworth, in his book Never a Dull Moment: 1971, the Year That Rock Exploded described as “a self-indulgent bore and a turn-off for those people who didn’t spend their days wondering what Grace Slick and Paul Kantner were up to” — is not what ushered in WEVL or what has seen it grow to more than 2,000 members today. You may not hear The Eagles’ “Desperado” or Bachman-Turner Overdrive at 89.9, but you might hear “Little Girl Go Back to School” by John Lee Hooker and “Disco Rough” by Mathématiques Modernes. Because what has given WEVL its longevity is what helped make popular music itself great — the eclecticness, the spontaneity, the unknown. A WEVL playlist — like a mix-tape made by a close friend — is a little bit of mystery coming from that box in your car’s dashboard.

These days, though, it may not just be coming from your car’s stereo, but from your cell phone or the computer on your desk. While the technology of getting the FM signal out hasn’t changed in a century — “You still have to have a transmitter with an antenna on a stick, and you have to have a way to get the signal from here to the transmitter,” Craig says — programming technology has changed. Where programmers used to haul in their own vinyl record collections for a show, that has moved on to cassettes, CDs, and, now, by simply plugging a laptop or iPad with playlist into the mixing board (not everyone has moved on; some music you might still hear with the pop and hiss of real vinyl).

Along with advances in technology, of course, is the Internet and streaming music. “In the past you thought it was a big deal if somebody in Germantown or Collierville was listening to you and now, since we stream, people all over the world can listen,” Craig says. “I remember the first time we were streaming a pledge drive and somebody said on the air, “We think WEVL makes Memphis a better place to live,’ and this woman called in and said, ‘Well, I think WEVL makes San Diego a better place to live.’”

Along with the music and sense of community, the source for revenue streams in as well. “We have some very generous members who give monthly from New York and Indiana,” Dorsey says. “Some of our best donors are actually from out of state.”

Streaming online is an expensive undertaking and, in addition to the members and donors, WEVL has a family of local companies and organizations such as the Community Foundation of Greater Memphis, Central BBQ, the Hyde Family Foundation, and AutoZone that underwrite programming.

For those of us who came of age in the 1970s and 1980s, listening to WEVL is akin to sitting on the floor of a friend’s bedroom as he digs through a stack of vinyl records or a mound of cassette tapes for the next song. While the programming at WEVL isn’t quite so helter-skelter, there is that anticipation for what’s next, a moment of holding our breath before the next chord or drumbeat ushers in the next tune.

“Radio is the most intimate form of communication with an audience, much more so than television because it’s more of a one-on-one communication where someone is talking to you directly,” Craig says. “A lot of people really use radio as a friend and for companionship.”